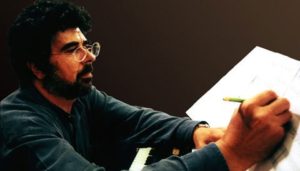 There are few composers in the film industry who have produced more moving and memorable scores than Gabriel Yared. While not a household name, this Franco-Lebanese composer and producer has written music for film classics such as the English Patient, Betty Blue and The Talented Mr. Ripley. What separates his work from other composers is his ability to produce music for a film which makes it impossible to imagine without its evocative soundtrack. It is his gift of transporting the listener and the viewer to other times in history and distant places.

Yared was born in Beirut, Lebanon. He was barely five when he was sent to boarding school, where he discovered his love for music. At his strict Jesuit school, he learnt to play the organ and on his own taught himself the rudiments of musical composition. In his early twenties, he chose to abandon his studies in law in to pursue his musical passions. He travelled all the way to South America and to the jazz clubs of Rio de Janeiro.  This proved enormously influential and following this, he started working as a musical arranger and collaborator with French musical stars such as Johnny Halliday, Francoise Hardy, Charles Aznavour and Sylvie Vartan.

His eclectic style and openness to experimentation made him an ideal choice for directors and film makers. He began writing music for films in 1980. For instance, he was given the chance by French film director Jean-Luc Godard to score the film Every man for himself. However his most successful collaboration to date was with the late British film director Anthony Minghella. For his work on the English Patient, he was nominated and awarded an Academy Award.  It is hard to imagine the film without his reworking of the beautiful Hungarian folk song “Szerelem, Szerelem” sung by Marta Sebestyen.

His signature style is one of openness to musical elements of all kinds. In the 1987 classic Betty Blue, he experimented with jazz to produce sultry tracks which earned him the French cinematic award, the César. He achieved similar success with his work on Jean-Jacques Annaud´s 1992 seminal film The Lover.

Lately Yared has worked on music for Angelina Jolie´s not-so-successful film By the Sea and in the newly released US-Spanish co-production The Promise about the Armenian genocide. It is estimated that to date Yared has produced at least 100 scores. However he has also branched out to write music for several ballets. At the recent Cannes film festival, which marked its 70th year, Yared earned a place a member of the ´official competition´ jury. In addition, he is scheduled to play a concert of his music at the end of the year with the London Symphony Orchestra. It will be a testament to his success and will place him within the firmament of cinema´s greatest composers.