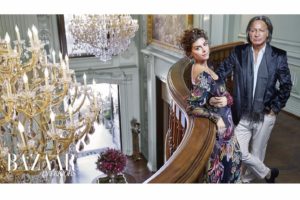 Gigi Hadid is considered to be the world´s hottest and most in-demand fashion model in the world today, yet less is known about her talented and ambitious father who develops houses and hotels for the uber-rich and Hollywood elite.

It is only in the last few years that the name Mohamed Hadid has gained notoriety due to the success of his model daughters, Gigi and Bella, and his former wife Yolanda Foster. Yet Hadid himself has carved out an extremely productive career as a real estate developer.

He was born in the town of Nazareth in 1948, which is now located in Israel. He then moved to Damascus and later Beirut. When he was a teenager he moved to Washington DC after his father secured a job with the media outlet Voice of America. Before building his reputation as a developer, Hadid first began by restoring and importing luxury cars.  It was in Washington that he established his design company which focused on offices, but also residences. Elegance and opulence were the features that distinguished Hadid´s projects. In 2000 he moved to Los Angeles to cater to the luxury living market. He started to build residences for multi-millionaires who had high expectations as far as scale and lavishness were concerned. Hadid notes, “I build castles as homes, but I make sure they are warm”. The Hadid Design and Development Group is also responsible for building an estimated 15 Ritz Carltons around the world and the Los Angeles Times claims that Hadid is the ´man responsible for LA´s rising luxury real estate values´. As a result, the developer is estimated to have earned a net worth of $100 million USD.

Apart from his business acumen, it is his Hadid´s appearance, his striking blue eyes and silver mane that add to his vibrant character. He has courted many beautiful woman, who have been eager to embrace the billionaire lifestyle. He married Yolanda van den Herik in 1994 who produced three children: Gigi, Bella and Anwar. However they divorced in 2000, yet still remain close friends. He now lives with his Iranian-model girlfriend Shiva Safai in a 48,000 square foot mansion in Bel Air called Le Belvedere, which has featured in a number of magazines and even has its own website. According to reports, it took 1000 workers to complete its construction.

Hadid´s work as a developer has not been without controversy. For instance he has been the subject of a number of lawsuits, and has filed for bankruptcy at least eight times. Yet he has been quick to respond to his detractors: “The higher you get, the more people want to climb just to knock you down. Just remember, only a fraction realise their own dreams and will never reach where you are”.

Nevertheless, he is still very much in demand and while his full time work is devoted to building properties for billionaires and Hollywood´s elite, Hadid also runs his own art gallery and has appeared in a number of popular reality TV shows. At 67 he has little intention of retiring soon.