But to make it clear : a corsair is not the same as a pirate. A pirate works for himself. He captures all meeting ships with their cargoes on his own account without having to justify himself to anyone. He does not need to follow rules, except those of his own interest!

A corsair also takes ships but, on the contrary, he does so on behalf of a government, which has authorized him to do so against an officially declared enemy. The authorization is materialized by a document called “letter of mark”. This letter indicates the mission and name of the nation that can be attacked. On the return of peace, the mission is over. From then on, these letters are no longer worth anything. Each country had its own formulations. In France, these letters authorized a captain to run on the “enemies of the State”.

Since a war fleet was costly, governments voluntarily appealed to private individuals to reinforce the naval forces of a country, which was achieved by distributing letters of mark. Each country had its own denominations to indicate the corsairs. In the Netherlands you would call them kapers, kaapvaart, commissievaart or corso, in France of business and corsairs and in England of privateers and privateering.

To show the legality of a prize, a procedure had been devised which a corsair had to follow conscientiously, because it was controlled in the port where the capture was brought or before a court. Failure to do so could result in unfortunate repercussions for the corsair. His capture was not legitimized by the prize board. It was therefore necessary to release the captured ship and its cargo and possibly pay compensation.

Without too much detail, it is important to understand that racing warfare was only possible in times of belligerence. Consequently, the Dunkirk corsairs, hated by the Dutch, were not pirates because they operated legally according to letters of marks provided by the King of Spain until 1648 and later by the King of France. And the Dutch losses are mainly due to the wars against France (1672-1678, 1687-1698), the war of the succession of Spain (1701-1713), the four Anglo-Dutch wars and the Napoleonic period (1795-1813 With a truce in 1802-03). (Is not it rather 1793-1815)?

However, this was a formally legal approach. The reality was often more nuanced. Corsairs who won big during a period of war saw their gains reduced to zero when the war ended if it did not return to its usual activity …. The temptation to “work” for himself, and thus to become a pirate, was great. He could also sell his services to another country at war. The same thing could happen to the crew as well. They could easily turn to another “employer”.

Race or piracy in Algerian-Dutch relations [2] 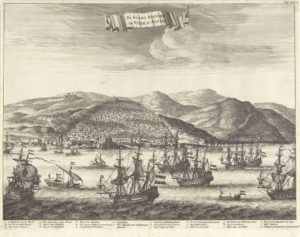 In the literature on racing in Barbary, the confusion between pirate and corsair is also frequent, which can be explained by the fact that the two words have the same sound in Arabic, although they come from different meanings: karssan can therefore mean pirate and corsair.

In general, it can be said that it is more about race. Captains of “arrested” vessels must show bills of lading and other documents and governments conclude and break treaties. Here are a few examples. As the Netherlands were at war with Spain until 1648, they sought an alliance with Algiers. When, from the end of the 16th century, the Dutch merchants, with the Dutch corsairs in their wake, showed up in the western part of the Mediterranean, relations with Algiers intensified. Thus, the Dutch corsair Simon de Danser (Dancer) sold his booty to Algiers. From 1616 the Republic had from time to time a consul to take care of the Dutch interests. This charge was not always entirely disinterested: The First Consul, Wijnant de Keyser, bought the Dutch holds and tried to sell them to the European interests through his brother in Livorno. The Algerians attached great importance to the expertise of the Dutch, who introduced many innovations on the maritime development. Many of them have entered the Algerian service and some have even converted to Islam. That loyalty to a nation is not always respected, is shown by the fact that the Dutch corsair Simon de Danser exchanged his letter of Dutch mark against another of Algiers. From then on, he is known as Deli Raïs. Others have done the same thing: Suleiman Raïs (from Veenboer – Le Tourbier), Murad Raïs[4] (Jan Jansz, Van Haarlem) and Seffar Raïs (Thomas de Gauwdief – Filou).

When the Algerians, thanks to the innovations of their ships left the Mediterranean to sail in the North Sea and the Atlantic to win in Ireland and even in Iceland, it was no longer business but rather piracy. Yet the two aspects were there: in 1623 the ex-Dutch Murad Rais arrived with two ships to Veere in Zeeland to get supplies and to make repairs. Although its actions on the North Sea and its roundups in the Atlantic could not be considered “legal” actions, the Dutch government did not want to intervene because the Republic was not at war with Algiers. And a large number of young Zeelanders joined him during his stay in Veere. After 1648, the Algerians remained an essential piece on the international chessboard. They took advantage of the hostility between the three great powers, the Republic, France and England, in such a way that they were never at war with more than one, so that they could always count on the support of others And make loot in a legal way. Finally, an aspect that also tilts their activity on the side of legitimacy is the distribution of the booty according to a fixed plan: 20% for Allah (often translated by the State), fixed amounts for the port authorities and brokers Maritimes; As for the rest, it was divided between the owners and the crew, within which there was a difference in the distribution of the shares according to the function: one Janitsar (soldier) received 2.5 parts, one foam a half and one Carpenter 6 parts.

Note that there was no question of a closed legal system as happened in the 17th and 18th centuries in France and England. In the port cities of the Mediterranean there was no national jurisdiction because each city had its own rules and it was therefore difficult to judge their authenticity and legal validity ….

In conclusion one can say that, although there was a difference in principle between pirate and privateer, often the “victims” did not notice it. Formal conditions were too vague and it was not always easy to guess whether one was actually in a war situation or not. Therefore, it is best to be careful using the word pirate. For each catch, whatever it was, there was usually a legal basis, and the latter finally defined whether it was a matter of race or piracy. That the ship and its crew did not always realize the difference is another story …

Action between the Dutch fleet and the Barbary corsairs, painting by Lieve Pieters Verschuier in the National Maritime Museum in Greenwich, BMC0849

Bastiaan Stopendael, The Dutch fleet under Michiel de Ruyter in front of the city of Algiers.