On 10 and 11 October 2016, The president of Promena was invited to the international colloquium on “Mediterranean Dialogues” in Béjaïa, Algeria. The event took place in the regional theater of Béjaïa, 230 kilometers from Algiers and was dedicated to the 700th anniversary of the death of Raymond Lulle. Raymond Lulle was a Maroquin philosopher, poet, missionary, and theologian. The event was hosted by the non-profit organization Gehimab, the cultural and social-educational association of the University Abderrahmane Mira in the city of Bejaïa. 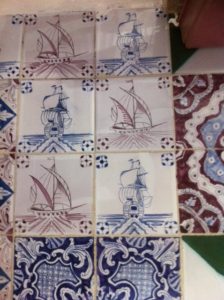 On 10 October the event started at 17:30 with the welcome of the participants and the opening ceremony including the representative of the Ministry of Culture, Mr. Santi Vila, culture delegate of the Government of Catalonia, Mr. Wali of Wilaya and the president of A.P.C. in Béjaia. Afterward, a concert was given by the Catalonian singer Lidia Pujol; the evening ended with a collation.

The next day started with a conference and afterward a round table. Then after lunch, the program went on with a visit to the cave of Raymond Lulle at the Cap Carbon, which is a land tongue situated in the north of the harbor of Béjaïa. In there, it was shown a concert of the orchestra féminin d’Ahbab Cheikh Sadek elBedjaoui; the evening closed with a ceremony including cloture.

(Picture: Dutch tiles in the Casbah)

The President of Promena was honoured by having the opportunity to give a speech at this international event. The topic of her speech was « Multiculturalism in the Netherlands ». Before talking about multiculturalism, Ms. America stressed the long and intense relationship between Algeria and the Netherlands: “Indeed, since the sixteenth century, Algerians and Dutch have common relations, sometimes passionate, but often friendly, in any case always rich culturally. It is this interpenetration of cultures which favours the knowledge of Algerian traditions and history by the Dutch”.

Here is the president’s speech at the event: 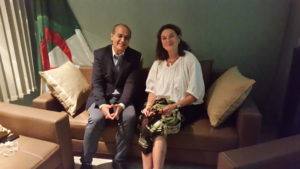 The Promena Presiden during her stay in Algeria was invited to visit the historical sites of the “Congres of Soummam” (picture 1) in the Kabylie – region, as well as The Roman Ruines at the City of Tipaza (picture 2) 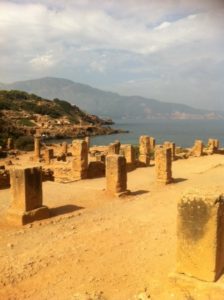