In 2010 when art patron and connoisseur Saeb Eigner launched the magnificent coffee table book Art of the Middle East: Modern and Contemporary Art of the Arab World and Iran, he chose as its cover adepiction of the Arab songstress Umm Kulthum with her trademark dark glasses. For those unfamiliar with the contemporary Arab art scene, the painting made a bold impression, since it combined traditional imagery with a modern artistic flair. At the time, outside Egypt, the artist Chant Avedissian was relatively unknown, but the inclusion of his work on the cover of Eigner´s book helped introduce him to a wider audience. 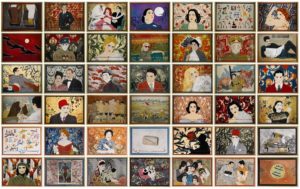 Avedissian was born in Cairo in 1951 to Armenian parents who had escaped Turkey to avoid persecution at the hands of Ottoman forces in 1915. Although he grew up in Egypt, after finishing high school, he travelled to Montreal in the early 1970s to study fine arts at the School of Art and Design. He then moved to Paris in 1974 and enrolled in the École nationale supérieure des Arts Décoratifs where he specialised in print making. In 1980, he returned to Egypt to work for the Agha Khan Foundation. There he worked with the Egyptian architect Hassan Fathy who introduced him to traditional art and locally-sourced painting materials. As an artist Avedissian admits that he found Western artistic techniques too rigid and being back in Egypt gave him the freedom to experiment.

On the eve of the first Gulf War in 1991 his creative energies were roused out of a fear that the region was about to descend into chaos. It convinced him that the cultural heritage he adored needed to be preserved for posterity.  He set about working on pieces inspired from Egypt´s Pharaonic past; Arab nationalism and the country´s cultural heyday of the 1940s and 50s. Prominent individuals that feature in his work include Gamal Abdel Nasser, Umm Khulthum, singer Abdel Halim Hafez and the composer Farid al-Atrash. Other images he uses are appropriated from magazines and popular advertisements. Avedissian uses different materials and techniques to create composite pieces, for instance, he often uses stencils to produce images on a background using gouache, along with gold and acrylic paint.

His most famous piece to date is Icons of the Nile, which consists of 120 separate parts depicting various politicians, musicians, actresses, as well as relevant historic characters of the mid to late 20th century. In 2013 in Doha, the work sold at a price that beat all records for an auction of ´contemporary art in the Arab region´. As a result Avedissian became the highest selling living Arab artist. In describing his seminal compositions Sotheby´s noted: ´Avedissian saturates his works with various suggestions and connotations, eloquently drawing our attention to the many faces of modern Egyptian society and Cairo’s visual landscape´. Oxford University Professor Hratch Tchilingirian thinks Avedissian has a ´revolutionary edge´ when it comes to his work. It is true that Avedissian has been critical about the influence of the west on Middle Eastern art. Nevertheless, it is the fusion of east and west that make his pieces so unique.

Today his works are held at prestigious institutions such as the National Museum of African Art at the Smithsonian Institution, the British Museum and the Institut du Monde Arabe in Paris. Avedissian´s website is well-worth visiting as it contains high resolution images of his work from the mid-1970s to today.