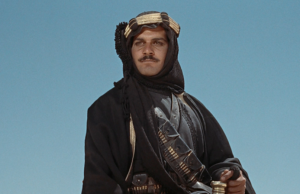 As the Awards season raps up in Hollywood, it is worth taking a look at some of the Arab actors who have graced the silver screen and how the film industry has evolved towards the Middle East.
Many consider the 1950s and 60s to be the golden age of Arab cinema. The actor who perhaps best symbolised the glamour of the era was Omar Sharif. Born Michel Dimitri Chalhoub, in the Egyptian city of Alexandria, he would later choose to convert to Islam in order to marry the actress Faten Hamama with whom he would act alongside in many films. Sharif began his acting career in the mid-50s and starred in numerous Egyptian films before he made his big break in Hollywood. In Egyptian cinema, Sharif was lauded for his good looks and gentlemanly charm. His star power captured the attention of legendary film maker David Lean. Lean chose to cast Sharif´s as the character of Sherif Ali in Lawrence of Arabia. His charisma helped him secure the lead in another Lean 1965´s epic Dr. Zhivago, which cemented his reputation as an international star. Sharif´s presence excited western film going audiences, who for years were mostly unaware of the talent that existed outside the United States and Europe. Sharif made dozens of films, some more memorable than others, but when he passed away, co-stars such as Antonio Banderas noted that ´he was one of the best´. Even now, no Arab actor in Hollywood has succeeded to match his success.
Sharif perhaps deserves some credit for helping to pave the way for actors from the Middle East to follow the Hollywood dream. Unfortunately though Arab actors have often been the recipients of typecast roles and given few opportunities to display the range of their talents. While there has been significant criticism of this by academics such as Jack Shaheen´s whose 2001 book Reel Bad Arabs dealt with subject of the negative portrayal of Arabs, fortunately the phenomenon appears to be fading as audiences are eager to embrace new stories about the Middle East. In the last two decades, with geopolitics frequently centering on the region, the subject matter of films has diversified. One actress who has proven her mettle as a performer in both Arab and Western cinema is Hiam Abbas. The Palestinian actress has appeared in noteworthy films such as Paradise Now, Munich and the blockbuster Exodus: Gods and Kings. The industrious actress has given many potent performances that seem to capture much of the sorrow and melancholy that exists in the contemporary Middle East. She has been unafraid to take on controversial roles and therefore has become the go-to actress for directors who want to examine difficult subject matter.
Other Arab actors based in Los Angeles notice a gradual change. Directors are taking on new themes and screen writers are creating meatier roles for Middle Eastern characters. In an article in the Los Angeles Times, Egyptian born actor Ayman Samman who has made a career from playing the role of the Muslim terrorist or other typecast positions, says that ´he has sensed a bit more subtlety and depth these days in scripts portraying Muslims´. Directors and screen writers want to offer roles with depth. The 2007 film the Visitor received a positive response and praise for its lead actor, the Syrian actor Haaz Sleiman. He was later cast in the mini-series Killing Jesus, which aroused controversy, since the Muslim-raised actor agreed to play the role of Jesus.
In order to give US film makers better chances to locate talented Middle Eastern actors and actresses, Egyptian film maker and producer Amr Koura decided in 2016 to open the Creative Arab Talent in Los Angeles. He told the Hollywood Reporter, “I really want to keep [Middle East talent] constantly in the minds of Hollywood,” he says. “What I heard every time I met people before I started was that they’d love to have Arab talent, but ‘we don’t know who to talk to.’ I want to be the guy they can talk to. I’m trying to establish a trust base, and being in L.A. will help me do that.” Through improved collaboration between writers and directors, in the years to come we can expect to see more films which depict with greater accuracy the reality of the Middle East and its complexities. This current generation is eager to embrace the next Omar Sharif.