This paper is part of a series (Magique Algérie) of articles, written for a magazine, aimed at promoting the archaeological heritage of Algeria. In this issue TIMGAD THE AFRICAN PUMPY

Algeria is full of historical, natural and archaeological sites. These wonders are waiting to be discovered by visitors who will not fail to be seduced by a country that does not give tourism the interest it deserves and that would make it, a flagship destination par excellence, to the image of its neighbors, yet less well off by Mother Nature

Among these wonders, seven have been classified by UNESCO as World Heritage of Humanity:

Who has never seen Timgad a military colony originally (Colonia Marciana Traiana Thamugadi) can not understand, how was a Roman city with predominantly indigenous component. Timgad, a city that symbolizes, omnipotence in its dimensions, military, economic, cultural a city that embodies urban unity and personifies the Roman organization. Whoever discovers it for the first time, will probably not, at first glance, have the same fascination as for Tipasa, scattered in its varied scenery, linking the maritime to the country, or that for Djemila / Cuicul, wrapped in its ruins multi secular, clutter of evocations. But do not we say that the first impression is not always the right one? The excavations have given birth to an impressive city, whose construction has been spread over five centuries; Under my amazed eyes, emerging from the past, emerges now, a great Roman city, almost intact. 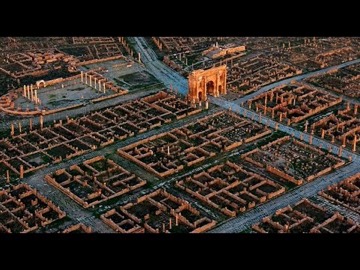 Who visits Timgad, this living image of the Roman domination in North Africa, will not fail to raise the orthogonality of the urban fabric, according to a Hippodamese plan. Its structuration, according to the dedicated axes, cardines and decumanes, separates the city in insulae more or less equal, recall the linearity of the American cities and well before, the Sumerian colony of Habuba Kabira, built at the end of the IV millennia BC. J. – C., on a preconceived plan in checkerboard. Unlike other cities of antiquity, Timgad is fortunate not to have been stifled under the strata of other civilizations or conquerors. This city, will make say to a man of mind making of the sensibility that “Timgad releases an intellectual emotion of an archaeological richness, recalling Pompeii”. Pompeii the African.

Who has visited Timgad, will understand that we have opened our eyes to the beauties of the enchanting spell, of a city unfolded in the sun, whose spirit obsesses ad vitam aeternam, these vestiges of magnificence. When James Brucen, a Scottish explorer discovered in 1776, a triumphal arch partially buried, he did not suspect that under his feet were buried the ruins of the most beautiful and largest Roman colony, built in North Africa. But ugliness, jealous of so much beauty has decided to punish this eternal splendor.

Who will visit Timgad, will be indignant. Indignant by this huge theater, “Toutenbéton” built, in defiance of the laws of the Republic and the field of visibility of the ancient monuments that surround it and, worse, above remains not yet explored. How can one inflict such an injury on a site classified “national heritage” for more than a century? How can one transform “Timgadland” into a “world heritage” for almost 38 years? Do not stop denouncing, the defenders of this abomination.

But after reflection, I can not help but relativize this epidermic reaction, in view of its positive impact, for the protection of the ancient theater of 3500 seats, relieved of the crowd of undisciplined visitors and vehicles, which risk weakening its structures.

Who will visit Timgad, will go back to the 1st century BC, and will understand how the Romans managed to cope with the turbulent indigenous tribes, drawing them into a city, which improves social life, thanks to firstly, to the commerce of their products, then, succumbing to the ecstatic heat of its baths and to the discovery of the entertainments which the theater offered, finally, by deciding to settle definitively, to obtain the citizenship after having engaged for 25 years in the legion. This pax romana led in just 50 years after its foundation, to make Timgad, a city mainly inhabited by indigenous people.

I will not dwell more on Timgad’s history and ultimate annihilation, because I prefer to keep only this wonder and not overwhelm all those people, who do their best to perpetuate its splendor. Among these people, I would like to thank the site manager who guided us and, exceptionally, opened the doors of the museum, closed for so long, for work. But to start this museum visit, must we women who do the weeding oh how much interest cardo pavers join us, too busy. 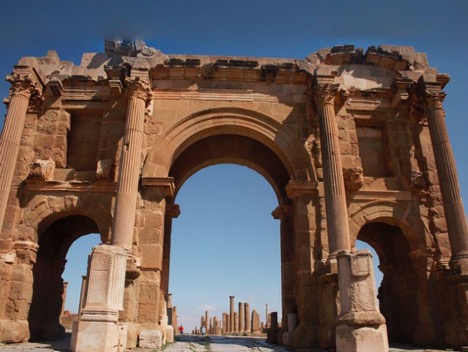 to tell the truth, by an opportune picking, stalks of wild fennel, obviously, spared from the inevitable pollution of the edges of national roads. This ephemeral memory is destined to end in a jar for the traditional preparation of broken olives with fennel. I close the lid of the jar and engulf myself in this finally accessible museum, since it became an impenetrable fortification for the public.

The bas reliefs, the busts in honor of Venus, Diane, Pscyché …, are splendid and the mosaics lining the walls and floors of the museum, are always as bellicose as in the fleeting memories of my last visit, which goes back over 30 years old. However, some of these mosaics seem irreparably damaged because of the fractures that run through the walls and floors that support them. 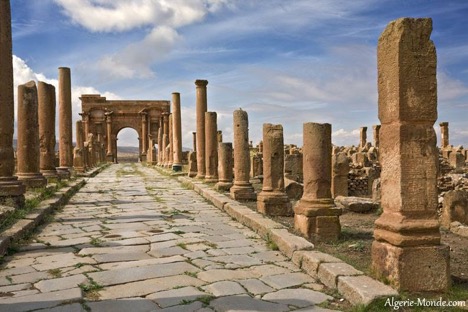 To avoid this inherent risk of building defects or earthquakes, it should perhaps be that the mosaics are no longer fixed, directly on the floor and walls, but on supports, wood, possibly.

I do not support this report, photos of the museum exhibition because it would have been wrong for me, to violate the instructions, prohibiting shooting, inside the museum. Even my friend B, a great amateur of selfies, despite the game of the cat and the mouse with a guardian, to whom it is not done, has not managed to immortalize in front of these representations of scenes of Roman life, or rather Romanized Berbers.

Timgad or Thamugadi in the Berber language, (“the fortunate”), founded ex nihilo in the year 100 AD by the Emperor Trajan, as a colony, which remains one of the most beautiful cities of the Numidian-Roman period in Africa, is classified since 1982 by UNESCO, World Heritage of Humanity.

The visit is complete, but how …

Leave Timgad without a tear.

Leave Timgad without leaving a part of yourself.

Administrator of HPA Group, History and Heritage of Algeria